Most of this website is written for a specialist scientific audience; folks who aren’t scientists are very welcome to look around, but this page might be a more accessible introduction. For a compressed version of information about me, please see my CV. I am a professor at U of Tennessee, Knoxville, in the department of Ecology & Evolutionary Biology. In my lab, we develop and apply phylogenetic tools to address evolutionary questions. 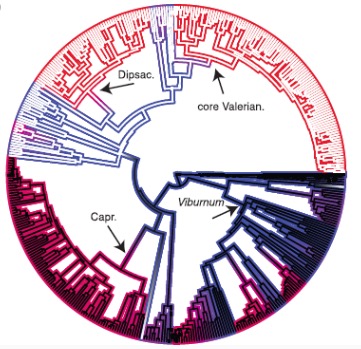 They are usually generated by a direct research need: how can we tell whether this group is evolving at a different rate? How can we choose between phylogeographic models without limiting ourselves to a pre-selected small set? Is there hidden variation in states that lets some herbaceous plants retain the ability to make wood while others have lost this ability? By developing techniques to address these questions, we both solve the original question and enable other biologists to use these new techniques to answer more questions. Broadly, the areas covered include trait evolution, species delimitation, phylogeography, dating trees, and more work in progress.

I work on empirical systems in collaboration with others as well as other kinds of studies, but many people coming to this website are probably most interested in methods developed here. Some highlights:

I’ve taught everything from 200-person introductory biology courses to small graduate reading groups. Every Fall I teach a macroevolution course for upper level undergraduate students and graduate students. I now teach (sponsored by an NSF CAREER grant) an open graduate course in phylogenetic methods every spring. I also organize and/or teach at a variety of workshops. A key component of teaching is mentoring students and postdocs. I’ve mentored four graduate students and fifteen postdocs directly. See here for more information.

I have served as an associate head for the EEB department for the past few years, focusing on graduate students. In that role I have worked to address student concerns and try to improve climate. I was also the associate director for postdoctoral activities at the National Institute for Biological and Mathematical Synthesis (NIMBioS), managing training and evaluation of postdocs. Other service includes organizing things like hackathons to draw in new participants and workshops to train biologists in new tools. I also co-organized the iEvoBio conference for three years and helped with other biology conferences (for example, scheduling all the lightning talks at a couple of Evolution meetings). I’ve done workshops to help with students applying to grants, overseen grad admissions, etc. I have been heavily involved in the Society of Systematic Biologists, in the past serving as the communications director and a member of the council. I am also the faculty advisor for Darwin Day Tennessee, one of the oldest Darwin Day events in the US (our activities now range from teacher workshops to bringing in speakers like Camile Parmesan and Neil Shubin to having giant puppets of Darwin and Wallace greet children at a birthday party for Darwin. I also try to make biology a better, more diverse place, whether it’s through helping sustain our department’s women in science group to talking about imposter syndrome with graduate students to finding ways to get a diverse set of applicants for our graduate program to creating a tool to allow people to self-evaluate letters of rec they are writing for words associated with biases.

In the last ten years, work in the lab has been funded by six NSF grants to me as PI or Co-PI as well as awards from iPlant, Encyclopedia of Life, and Google Summer of Code to me or people doing work in the lab (see more info here). Grad students in the lab have been supported by teaching assistantships as well as a PEER fellowship. The UT Knoxville-based National Institute for Mathematical and Biological Synthesis (NIMBioS) remains critically important for my work, whether by funding independent postdocs (I have mentored seven NIMBioS postdocs, in addition to three additional postdocs in my lab with other funds), sponsoring workshops, or organizing working groups.